On Aug 22, 2017 I woke up in the hospital. It was just me in the car, I was running late to work and took a different route. My car was T-boned but it was ruled that I had the greater responsibility to stop; I have no memory of it so to my annoyance I can’t say how it happened. I did inquire about the other driver and was told they’re okay and would just need some physical therapy. 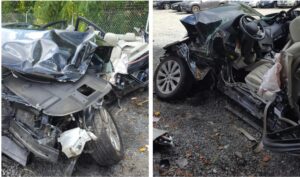 This is the worst I have ever and hopefully will ever be hurt.
Some cuts and scrapes, a chipped tooth, bruises, anemia, a  sub clinical concussion and wrenched neck on the left side, several micro pelvic fractures and a hip fracture. It also seemed as though I might’ve had a finger crushed had I not been wearing a titanium ring. You can’t do anything with a fractured pelvis except let it heal which takes approximately 2-3 months to heal, which means I wasn’t able to start physical therapy immediately. I fractured my femur and rather than a cast a titanium rod was inserted through my knee. The knee insertion caused some scar tissue and due to my prolonged therapy start I was unable to bend my leg. Currently my knee cap sits a bit low making my stride a bit uneven and the incision area is numb. 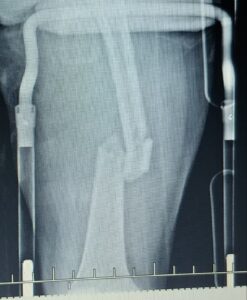 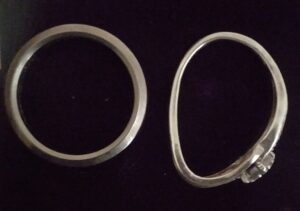 I was in the hospital about 4-5 days, I had to be able to walk with crutches before being discharged. They had to move my IV to my hand because apparently I kept bending my elbow. I don’t remember much of it but I vaguely remember the nurses we’re nice and I got along with my roommate. I did record some while I was in the hospital but watching it back was depressing and so I never put out a video. I was given morphine, oxycodone and blood thinner; I lost basically all the muscle in my leg and so it was extremely heavy.
I was uninsured until being signed up at the hospital, that being the case I almost couldn’t get my prescription because they were opioids. My mom had to call the hospital and I was able to get the oxycodone, the hospital supplied blood thinner(lovenox) which I also had to be able to give myself before being discharged. I also took arnica while at home and I don’t know if I was still too out of it to know any different but I thankfully didn’t need the morphine, I actually had oxy left(it has been recycled). 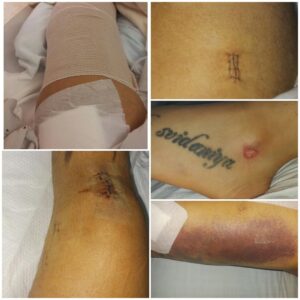 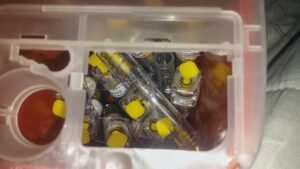 As the time passed my memory had become a bit wonky. Even now there are things that I know how to execute but if you asked me to elaborate I wouldn’t be able to tell you a thing. By the time my mind cleared up I was just depressed; I’d been active my entire life and then suddenly I could barely walk.
I could feel a knot the middle of my femur were new bone was growing(I can kind of still feel it). That area would hurt in therapy, it’d feel like my thigh was going to snap, It wasn’t but it was rough. One of my therapists told me 120 degrees is considered acceptable bend after a knee replacement, however, I’m not elderly and I’m also very active. Average knee bend is 140°-150° and so that’s the goal without assistance from gravity.
Before starting physical therapy my leg could bend 23°. Measurements were taken laying down, standing you can take off about 10 degrees. At first Physical Therapist took two measurements, assisted and unassisted.
Oct 17th 26°|35°  Nov 16th 50°|58°  Nov 29th 61°  Dec 12th 71°|75°  Jan 8th 90°
These are my Dec and Feb x-rays 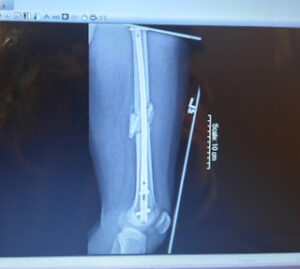 As time progressed my small limp went away and the knot of new bone became hidden under newly developing muscle. Due to the scar tissue under my knee cap running doesn’t feel stable(it is though) and driving stick as a no go on the endurance front. The rod will be there forever but I did have to get the two screws near my knee taken out. I’d been told I was in better shape than most people who break their femur which likely aided in my recovery.
I’m doing well now, I have to keep up with exercise to avoid pain but being active is good for you. I can essentially sit fully on my shins now, mainly from gravity and not comfortably though. Looking back to write this was heavy on my spirit but I’m pretty happy with how I’ve maintained my leg. I could stand to be more consistent but I thankfully have good muscle memory and a pretty responsive system.
I’m wishing you all safety and wellness!

Is That Lifestyle Change Sticking?